Maladihalli Swamy - A Man of Difference 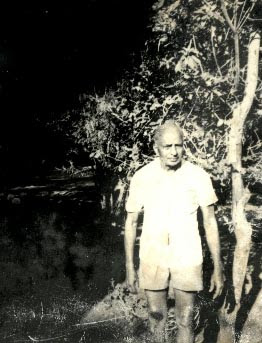 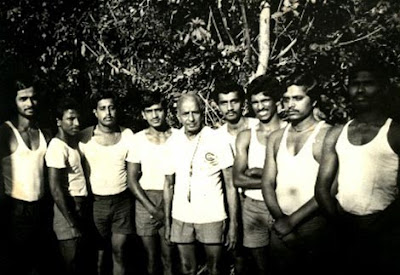 He was born in Kerala in 1890 and his original name was Kumaraswamy.
When he died he was 106 years old.
Due to intense pressure of his devotees, he wrote his autobiography “Jolige Pawada” in 1993, in which he has documented his life history from memory of the last over hundred years.
He was clean shaved person with a slight bent and he wore small grey shorts.
He walked so briskly, that many had to run to catch up with him.
He would start his day at 3 a.m.and needed just four hours of sleep everyday.

Swamiji says:
"Yoga is not doing a few postures.
I have seen some people who have a wonderful body, which can bend in so many ways, but they cannot bend so many vices in their life. They can hold their breath until eternity, but they cannot hold their greed, arrogance even to a small degree! If you can inculcate the good habits, even if you do not regularly practice Yoga, you are a winner in life after all. Keep smiling as you always do! "

Swamiji had done all his schooling in Kundapur.
His association with Dr. K. Shivaram Karanth, a Mangalorean, at Amba Prasaditha Nataka (Drama) Company at Tumkur (east of Mangalore)got him a clerical job in the Drama Company itself.
He was entrusted with the ticket sales and disbursement of salaries/wages to the Company’s staff.
As a school boy he participated and acted in many Dramas, Yakshagana and Thala Maddale.
Posted by Unknown at 3:41 AM 1 comment: 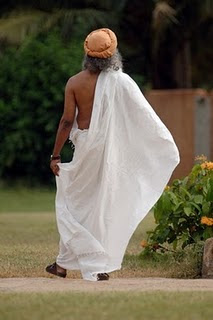 Sri Raghavendra Swamiji of Malladihalli popularly known as "Malladihalli Swamiji", was a founder of Anatha Sevashrama Trust, Malladihalli.
He taught Yoga to more than 4.5 million people all over the world keeping his base as Malladihalli Chitradurga District, a tiny village in Karnataka,

Raghavendra Swamiji was born in Kerala.
This Yoga and Ayurvedic Guru treated more than 3 million people for various diseases through his Ayurvedic medicines, and Yoga without any operations.

His main concern was to educate the poor people and teach Yoga to all cross sections of the society for maintaining good health.
He always says "You should not exhibit Yoga", in other words, Yoga is not for exhibition purposes or competition purposes.

Based on his 70 years of experience in Yoga and Ayurveda, and his various theories in Yoga teaching, as per him, the number of Yoga postures is equal to the number of animals and birds living in the world.

He called himself "Thiruka" (Beggar) and urged the people to donate freely to his projects, and thus succeeded in collecting funds and implementing his projects effectively during his tenure.


"Maladihalli Swami,first taught me yoga.
He used to do 4008 Surya Namaskars per day.
Just like me he got into yoga for the wrong reasons.
Right from his infancy, he had been a chronic asthmatic. He was just wheezing day and night. In those days, there was no proper medicine or treatment, and even if there had been, his parents would not have been able to afford it. They did whatever they could, but the boy was just wasting away.

When he was about 11 or 12 years of age, a yogi came by and the parents asked him to heal the boy. The yogi said, “Anyway this boy is not going to be of any use to you. If you keep him with you, he will die. Give him to me; I will take him with me.” He didn’t belong to the kind of people who are recruiting disciples. He wanted to walk alone; generally, he didn’t take anybody. But he took compassion upon this boy because he had his mission. This yogi was Palani Swamy – that’s my Guru too. So he took this young boy and trained him in the ways of yoga. The boy not only grew out of his ailment, he grew into a physically almost superhuman person – and he came and reminded me of yoga. [Laughs]"
Posted by Unknown at 3:15 AM 8 comments: